Find an Eye Doctor
Home  >  Primary Eye Care  >  Guide to Eye Health  >  Conditions that Affect the Pupil  >  Why Is My Pupil Small?

Why Is My Pupil Small?

Normal pupils are usually 4-6 mm in diameter in room lighting. With miosis, the pupils are less than 2mm.

Miosis is a condition where your pupil shrinks or constricts in size.

If your pupils remain small even in dim light, it could indicate that something in your eye isn’t operating properly. This condition is known as abnormal miosis, and it can affect one or both eyes.

There are many causes of pupils shrinking in size:

It’s usual for a newborn’s pupils to remain small for roughly two weeks so that their eyes are shielded from strong light.

In old age, the pupils begin to shrink as well. The muscles that control the pupils can become weak, making it difficult to open them. It may be more difficult to see at night as a result.

Swelling inside the eye can make it difficult for the pupils to expand.

This can occur due to an eye injury or could also be due to a condition known as uveitis, which causes swelling in the iris and the tissues around it.

Miosis can also be caused by medication side effects.

Certain medications for anxiety, muscle spasms and seizures, such as diazepam (Valium) and antihistamines like diphenhydramine (Benadryl), can cause the pupils to shrink.

Narcotics, whether prescribed or illicit, can do the same.

Some of the commonly used drugs that can cause miosis are these opioids;

Contact an eye doctor near you to find out why your pupils may be small.

Congenital miosis or microcoria is an inherited condition where the muscle that regulates the pupils or your pupil muscles aren’t properly formed.

When one or both of your parents pass on an inherited defective gene, this can affect either one or both eyes.

You may be nearsighted and have difficulty seeing objects far away if you have it. You could also develop glaucoma, which implies there is too much pressure in your eyeball.

The way your brain ‘talks’ to one side of your face, including one of your eyes, is affected by this rare condition.

Horner’s syndrome  has the potential to cause one pupil to be smaller than the other and can be inherited or develop after a neck injury or surgery.

It can also result from chest, neck and brain malformations and  a rare type of cancer called neuroblastoma, or a tumor in another part of the body.

Other causes of miosis may include:

The treatment will be based on the cause of your abnormal miosis. If a medication is causing it, you may be prescribed an alternative.

If eye inflammation is the culprit, your eye doctor may prescribe long-lasting dilating drops (atropine or homatropine) to widen your pupils. These are similar to the dilation drops your optometrist uses during an eye exam, but they can last up to two weeks.

If Horner’s syndrome is to blame, various tests may be required to determine the best course of action.

If you notice you have small pupils, schedule an appointment with an eye doctor near you to discuss treatment options. 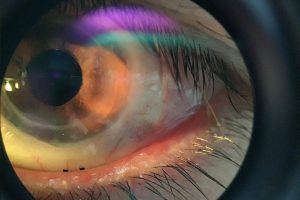 Next Article
Why Do My Pupils Look Big? »