Real life stories from parents of children diagnosed with ADHD— when a vision problem was an underlying issue.

When David was diagnosed with ADHD he could not catch or bounce a ball, his handwriting was illegible, and he was labeled special education, IEP, and dysgraphic.

We took him to a regular optometrist who said he had 20/20 vision, so we just chalked up his tendency to bump into things to his unique personality. Medication helped his behavior and concentration, but his ability to write and his coordination did not improve.

During school work David would sit with his head in his hands, leaning to one side, covering one eye or rubbing his eyes, and complaining of headaches.

Finally, after years of regular eye exams and more testing for David’s severe dysgraphia, we took David to a behavioral optometrist. After a battery of eye tests, including binocular vision tests, David was diagnosed with convergence insufficiency and eye tracking disorder.

Afterwards, I sat down with him and held up one finger. “How many fingers do you see?” “Two,” he promptly answered. Double Vision! I started to cry. Our son was 12 years old! I said, “David, how come you never told us?” He answered, “I thought everyone saw like this!”

Optometric vision therapy helped David with his headaches, his handwriting, and his grades— David is earning A’s and B’s, and taking AP and honors classes in high school.

Most importantly, David got his sense of self esteem and self worth back!

My 5 year old son, Scott, could consistently recognize about 4 letters and 1 number. We completed a battery of psychological tests and were told he had ADHD. I didn’t buy it.

I wasn’t looking for behavioral problems; I wanted him checked out because he didn’t know his alphabet. He has excellent verbal and vocabulary skills, so I felt the need to keep searching.

After visual exams with three different eye doctors, we determined he had trouble with binocular vision, focusing, and eye movement and tracking.

After 36 weeks of vision therapy, my son now knows the entire alphabet, all of the numbers, and is actually reading. The increase in his confidence is amazing.

Thank God we continued to search for an answer!

Kaitlyn was having problems with handwriting, spelling, skipping words when reading, transcribing words from one list to another, board to paper etc. She was also showing poor body awareness—appearing clumsy, and was having a hard time staying organized and staying on task.

At age 8, she was seen by an optometrist and fitted for glasses.

Kaitlyn was recommended for testing to rule out ADD. It was recommended that she have a developmental eye exam due to an overall weakness in visual-spatial and visual-motor skills.

Since vision therapy, we have noticed a big difference in tennis (her timing has improved so much!) and softball. She is doing very well in school this year— her handwriting has improved, she is able to copy from the board faster, able to read her music better, and her vision is clearer.

I wish we had detected this problem sooner, then Kaitlyn would not have encountered so many problems. I feel her self-esteem has improved so much and she seems less focused on small details, which allows her creativity to emerge.

When my son started preschool, his teacher suggested signs of ADHD. I had him evaluated and he was diagnosed as ADHD.

Reluctantly, in the fourth grade, I started him on Ritalin. It made an enormous difference in his behavior. About 8 months on the medication, he began to roll his eyes.

The optometrist found that Morgan had limited peripheral vision and monocular vision (suppressed vision in one eye, one-eyed vision). It finally all made sense! His inability to concentrate, limited attention span, class clown personality, sloppy writing, poor coordination, inability to excel in sports, etc. were all effects of his inability to see properly.

He has completed a program of vision therapy and I can’t thank the optometrist enough. I urge other parents to check out other professional allies before turning to medication.

Before Vision therapy, 16 year old Don had very obvious nystagmus. He was a constant good sized angle exotropia (35 – 40 PD) even after strabismus surgery at the age of 7, and had bilateral amblyopia due to very high astigmatic errors, as well as the nystagmus.

At Don’s initial evaluation, a detailed family history revealed a strong inheritance pattern of congenital nystagmus accompanied by exotropia and high bilateral astigmatism. His medical history was positive for attention deficit hyperactivity disorder (ADHD), for which he is currently taking Medadate daily.

He began a program of vision therapy to address the nystagmus, exotropia, and overall binocular vision dysfunction. His goal was to achieve sufficient visual acuity to obtain a driver’s permit.

At the end of Don’s vision therapy sessions, improvement was noted in most areas, and most importantly, his visual acuity of 20/40OU was now sufficient to allow him to attain his goal of obtaining a driver’s permit.

He is now 20/30, the exotropia is gone, and unless very nervous, the nystagmus is a thing of the past. According to the literature, this is supposedly impossible to achieve. This is a true success story!

Before vision therapy, William was very frustrated when he did homework, especially reading. After five minutes, he would rub his eyes and throw the book down.

He was told his vision was 20/20, no problems. That didn’t make sense. We feared he would hate school and reading. Also, his behavior was affected, making us wonder about ADD.

Then we heard about vision therapy. Twenty-eight sessions later (over a period of 8 to 9 months), William now loves to read and his attitude has changed dramatically.

Schedule an eye exam so that your child can be apart of these success stories.

SEE RELATED: Does My Child Have ADHD?

Prior to seeing Dr. X, Sarah struggled to do the work required of her in high school. She found reading burdensome, was unable to finish her homework in a reasonable amount of time, and was unable to keep up with all her assignments.

She was feeling frustrated and discouraged. Sarah had been put on Ritalin in order to help her focus on her work, but she continued to struggle.

Dr. X prescribed special lenses to help her stay more focused when she was reading or doing anything up close. The special lenses kept her gaze and focus steady, the print in her books did not jump around, she was able to concentrate for longer periods of time and not get fatigued, headaches or nauseated. These lenses have made all the difference in the world for Sarah!

Eve is an eleven year-old girl with a diagnosis of ADHD since first grade. She has experienced multiple symptoms including; holding reading materials too close, covering or closing one eye when attempting to write, tilting her head and losing her place when reading, reversing letters and words, reading slowly with poor comprehension, and displaying poor penmanship and overall fine motor coordination.

She had difficulty maintaining eye contact during social situations and often appeared “fidgety.” Most recently, C.E. was failing spelling, had trouble copying words from the chalkboard or text, and could not keep her place. She would often forget homework assignments and had difficulty organizing her desk at school.

After receiving vision therapy for just three months, her parents, teachers, and C.E. herself have all noticed a remarkable change in her overall behavior and functioning. C.E. continues to attend Vision Therapy once a week and continues to make steady progress.

Jerry had more energy and less concentration skills than most boys his age. We had been told by many teachers that he has ADHD. We did have him tested and found that NOT to be the case.

Staying on task in school and completing homework in a timely manner were still a chore. We had him screened for Vision Therapy. Sure enough, his problems with eye focusing, and right/left confusion were causing much of the inattention in school.

In ten weeks of vision therapy, not only has Jerry’s attention span increased, his attitude towards life has improved greatly!

My son graduated from vision therapy last week. When he started the therapy, he was a child who did not take on academic challenges well. There were always reports from his teachers that he could be performing better. In addition, he had developed a variety of subtle “tics”.

At one point, a respected neurologist to whom we had gone diagnosed him with mild “ADD” and suggested putting him on drugs if the issues did not improve.

About a month into vision therapy, he was more cooperative at home and in school, started to read without complaining, and actually started enjoying books. His math skills improved tremendously, as did his self-esteem.

We now have a happier, more cooperative son, whom, I may add, has been tic free for months! As a parent, my life has certainly gotten easier. We are all so much happier.

Prior to vision therapy, Troyana complained of frequent headaches and struggled with her reading assignments. Troyana was recommended to a developmental optometrist by her psychologist who was counseling her for ADD.

With Dr. X’s help, we realized that although Troy’s eyes were fine individually, she was having difficulty getting the two eyes to work together as a team. After vision therapy, Troy’s headaches have disappeared and she now reads above her level from several books each day. As a parent, I am so happy to see that Troy is finally enjoying reading.

Chelsea was diagnosed with Attention Deficit Hyperactive Disorder (ADHD) as a result of behavior that she exhibited in her second grade classroom.

She was having problems comprehending what she read because she was constantly losing her place and skipping sentences. Her attempts to organize school materials and do simple tasks at home were met with great difficulty.

She was also forgetful of her school assignments and responsibilities at home. As a result of her ADHD diagnosis, her doctor prescribed Ritalin, which seemed to help at first but the problems continued.

By the beginning of the fourth grade, Chelsea complained about double vision. A little over a month into her vision therapy the double vision disappeared. We decided to discontinue her Ritalin at that time and her progress continued.

After completion of her ninety-day therapy program, she demonstrated dramatic improvements in her reading and comprehension skills. She enjoys reading very much and her increased confidence is evident. She does much better at remembering her school assignments and her organizational skills are much improved.

Can you relate to any of these children?

Many of these children and parents experienced a significant amount of frustration until they finally reached someone who recommended vision therapy.

If your child is presenting with any signs of a vision problem, or academic difficulties, schedule a vision evaluation as soon as possible. 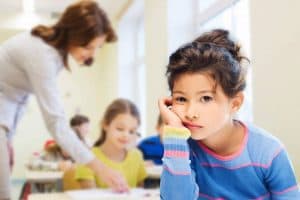 Next Article
Does ADHD Cause Social Problems? »

Our Most Viewed Vision Therapy for ADHD Articles