Personal stories from parents of children who were mislabeled as “lazy”, when a vision problem was the underlying cause.

Julian has always been a very happy child but frequently frustrated when it came to reading and improving his skills in most of the sports he played. I think his frustration became ours and both Dorothy and I felt terrible in hindsight because we thought his problems were caused by lack of focus and laziness.

We can still remember his reaction, “See, Dad, it’s not my fault!”, after we finally knew that his issues were based on his vision skills. It just about broke our hearts!

We were encouraged but tentative with the knowledge that, through Vision Therapy, we would see a reduction in his symptoms and improvements in his performance in school and in sports.

We were embarrassed that although signs were present, we did not recognize some of the signals, like hiding or covering an eye to try and focus when reading, or having headaches after reading.

We didn’t recognize how a lack of peripheral vision and depth perception affected his sports performance and frustrated his coaches. It’s all very clear to us now.

We were very lucky that Julian’s teachers had the experience to recognize Julian’s problems and the assertiveness to recommend that we have his vision tested at Dr. X’s clinic.

We have seen a huge improvement in Julian’s visual skills with regard to his schoolwork, sports activities and everyday life. His reading is smoother, faster, and he comprehends almost immediately. His sports performance has improved and we can see it especially in his soccer and hockey skills.

We believe this last year of Vision Therapy will forever change Julian’s path in life.

In the short time of six months I have seen Matthew go from, “I just can’t do it,” to “It was kind of hard, but this is what I did.” His whole outlook has changed. I knew we were making progress when while working on our therapy one night he said, “Mom, I know which one I am not supposed to see.”

We have enjoyed these Vision Therapy sessions and will miss them, but just seeing Matthew complete a written report, and not fight to get it done, is great. He will now pick up a book and actually read it— we used to do everything by audio books.

His teachers have even remarked that he volunteered to read out loud in class. He has also become a reader at church.

If your child has been told they are ‘lazy, the cause may be an undiagnosed visual problem, contact an eye doctor near you, who can discuss how vision therapy can help.

SEE RELATED: Why Is My Child Color Blind?

My daughter has had problems with reading for the past five years in school. We had her in special reading groups where she received a lot of one-on-one attention, and she tried very hard, but just could not improve her reading.

In one of the monthly parent/teacher group meetings, one of the teachers asked if we had gone to a specialist for her eyes. The teacher had had the same type of reading problems with her daughter and suggested an appointment with Dr. X.

Willing to try anything to help my daughter overcome her reading problem, I made the appointment. I was amazed that Dr. X found and explained that my daughter’s eyes were turning on and off while reading (suppression). I had never seen her former eye doctors do the tests that he did that day.

My daughter began Vision Therapy, and after only 4 weeks, I could tell a difference, not only in reading, but in her self-esteem and willingness to try new things. She was already much happier, and her teachers made comments about the improvements they saw at school. The improvements are far beyond anything I could have thought possible.

When I went back to the teacher/parent meetings for problems readers, I found out that 3 out of 10 people in the room had children who had done Vision Therapy and I was one of them. It had worked for the other two teachers with their children and I know it worked for my daughter!

Many times we think that children are just not trying, when it could be a problem with their eyes that could be corrected. I wish that someone had told me about Vision Therapy sooner.

The Vision Therapy/visual perceptual program has been wonderful for Ricky. School is so much less frustrating this year, for both of us. His teachers have been very interested in and supportive of the program.

For the first time in his life, Ricky is leaving spaces between his words when he writes and he can read for a sustained period without the words getting blurry. He doesn’t lose his place when he reads anymore.

He doesn’t get confused on tests and circle the wrong answer even when he knows the right answer. He doesn’t have to pretend he can read big books because now he really can. Last year I despaired of him ever being able to read “real” books, and when Mom is a librarian, that is a true sorrow.

Ricky still gets his b’s and d’s backwards, but before Vision Therapy, he also reversed a, z, 9, 5, 3, e, q, s, etc. His printing and spelling are still poor, but are much better than last year and he is continuing to improve. It will take awhile to unlearn bad habits and relearn the skills he missed when he literally could not see what he was doing.

The aspect of Vision Therapy for which I am most grateful is that it showed me that there was a reason Ricky had trouble learning to read and write. He wasn’t lazy, stupid or “just not trying” and no amount of fussing at him was going to make it better. It has taken the stress out of our relationship because now I know the problems he faces and what I can do to help him succeed.

We don’t fight over his homework anymore and it doesn’t take him all night to get it done. School is a pleasure, not a trial.

Last year I worried whether he would ever be able to graduate from high school. Now I am saving for college.

Written by the doctor following exit interview with Dale and Susan B., Jenna’s parents:

Michael had a problem with eye tracking and focus. He was not doing well in school and had problems with sports. Unfortunately, we thought he was just lazy and slow.

Michael went for Vision Therapy for three months and very quickly improved in school. There are no more problems regarding sports either.

Michael showed flashes of smartness and brightness before he had therapy. Now, after Vision Therapy, his real self comes through all the time.

Rachel hated to read out loud, but she usually got 100% on spelling tests. Everyone thought my child was just lazy, because she could spell so well. The teacher would get angry at her.

Now she’ll read out loud, and help her little brother with his reading. She has more self-esteem now.

Joe had a problem with reading comprehension. He knew every word, but scored very low on every comprehension test. I would read nightly with him and watch him omit every small word (a, or, the). I thought he was lazy, but he was actually diagnosed with a problem where his eyes did not work together.

Since Vision Therapy, the results in his reading comprehension have changed dramatically.

When our son was having trouble in school, we had some testing done. He was seen by a psychologist, independent of the school system, and it was brought to our attention that he had visual problems that may have been interfering with his schoolwork.

We had a visual examination done and it was horrifying to know that he could NOT see the biggest letters on the eye chart. How terrible we felt as parents that we did not know just how bad his vision was!

We found out that he needed bifocals, and for a 13 year old, that was BIG BAD news. It was hard for him to adjust to glasses, let alone bifocals … we also went through broken glasses (somewhat normal for teenage boys) and still some difficulty with schoolwork.

After Vision Therapy, we are no longer wearing bifocals (this was the goal of Vision Therapy) and he hardly needs glasses at all. He needs them for reading but can play sports and far away vision activities without glasses.

We are done with feeling guilty for “failing” our son and glad that he also made a sacrifice to work hard at the therapy. The price of therapy was scary at first, but in the long run, we would have more than exceeded the cost of therapy with specialized glasses.

It was a small investment, both financially and with time for our family, but an investment well worth it!

Is your child bright, but struggling academically? Have teachers labeled your child as “lazy”?

Schedule a vision evaluation as soon as possible. The earlier a vision problem is detected, the sooner your child can begin a program of vision therapy. 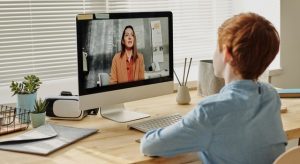 Next Article
Could Your Child Have Digital Eye Strain? »