Is Binocular Vision Important for Sports?

Binocular vision is important for athletes, as it impacts their performance.

An athlete can improve their visual skills and boost their performance on the field with the help of sports vision training.

Binocular vision is the eyes’ ability to focus on an object to  create a single image, this is critical for achieving on the sports field.

Binocular vision allows us to perceive three-dimensional relationships and depth between objects or people, such as a ball or another player, making it an essential visual skill, especially for athletes.

As each eye is in a different position in relation to any object, the eyes communicate slightly different spatial information and send these varying images to the brain. The brain then uses the differences between the signals from the two eyes to accurately judge speed, distance and depth.

When binocular vision isn’t operating at maximum capacity, it impacts an athlete’s speed and the accuracy of their movement along with their reaction time.

Contact an eye doctor near you to start a vision training program to improve your visual skills.

If an athlete has reduced binocular vision it doesn’t mean that they are constantly fumbling or falling over. It just means that they may collide more often with other players, or misjudge the direction or velocity of a ball.

Sports vision training is a customized program that improves the communication between a person’s eyes, brain and body.

Athletes need to have exceptional visual skills, as sports are visually demanding. Athletes need to be able to focus, move fast and react quickly. Sports vision training can help improve all the visual skills an athlete needs to not only make a difference between winning and losing, but between staying safe and incurring an injury.

Even if an athlete has ‘20/20 eyesight’ they may still have reduced binocular vision. Sports vision therapy can help improve visual skills that already exist.

The ability to enhance an athlete’s sports vision skills is a proven way to improve performance.

When our eyes and brain don’t work accurately together, particularly while playing sports, it can affect our reactions, accuracy, depth perception, speed, and timing.

Visual deficits slow down a player’s ability to process  and respond to what they see, and this may make it more difficult for them to catch a fly ball or judge the distance between them and the basketball hoop or goal post.

Athletes need many visual skills to perform their best.

Binocular Vision – the ability to maintain focus on an object, creating a single image with both eyes. Without binocular vision, athletes cannot accurately measure depth and distance.

Peripheral Vision – the ability to see movement and objects outside of your direct line of vision. This is important for athletes, especially when running down a field and being able to see other players coming at them from all directions.

Accommodation – the eyes’ ability to change their focus from near to distant objects and vice versa. For example, when a football player looks at other players coming toward them, then shifts focus to the ball on the field.

Smooth Pursuits – is the eyes’ ability to move smoothly, instead of the eye moving in jumps. It is a reflexive eye movement that is required when tracking an object through an environment, such as a flying ball.

Dynamic Visual Acuity – the ability to see when an object is still and the athlete is in motion or see a moving object when a player is stationary. It allows a player to visually discern detail in a moving object, such as a player’s number on a jersey.

Depth Perception – is the ability to distinguish the distance to, or between, objects. This is important for athletes when they need to interact with a moving object or hit an object.

Schedule an appointment with a vision therapy eye doctor to help you reach your sports goals. 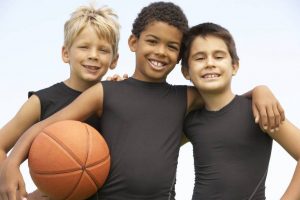 Our Most Viewed Guide to Sports Vision Articles