A Guide to Children’s Eye Diseases 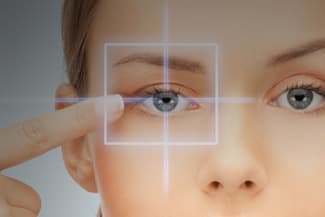 A guide to the common childhood eye diseases

Eye doctors recommend children have their first comprehensive eye exam from six months of age to ensure that their eyes are developing normally. After this initial visit, it is recommended to bring your child for a second eye exam between ages 3-5, and then again before they enter first grade.

As your child grows older, annual exams are crucial to ensure that their eyes continue to develop normally, and to detect any changes in vision or ocular health.

Important Note: Vision screenings conducted by schools are NOT a substitute for a comprehensive eye exam— ocular diseases and many vision problems cannot be identified through a screening.

Ocular development begins in the womb and continues throughout childhood and adolescence. The development of good vision is critical in a child’s first six years of life. This time is considered a “vulnerable period” because it is a time when children are most vulnerable to damaging vision changes.

Many sight-threatening vision problems can arise as a result of an eye disease or trauma to the eye that occur in the first six years of a child’s life.

It is important for parents to pay attention to signs that their child may be suffering from an eye health or vision problem.

Signs that may indicate an eye disease:

The sooner a problem is noticed, the sooner it can be diagnosed and treated— resulting in increased positive outcomes.

A congenital cataract is a clouding of the eye’s natural lens, and is present at birth. An infantile cataract develops in the first year of life. However, since many cases of congenital cataracts are not detected at birth, and are discovered within the first year of life, these two names refer to the same eye disease and are commonly used interchangeably by eye doctors.

Although it is rare, childhood cataract is one of the most common causes of blindness and severe visual impairment in children:

A cataract generally appears as a white spot on the pupil and causes vision to be cloudy, as if looking through a dirty window. The degree of severity can vary from being visually insignificant to causing severe vision loss.

Babies can be born with congenital cataracts if any of the following present while in utero:

Other risks include, if the mother contacts any of the following illnesses during pregnancy:

Congenital cataracts require early intervention to prevent the development of other vision problems such as amblyopia, or “lazy eye”. Lazy eye causes eye misalignment and reduced vision, which can impact a child’s learning ability, appearance, and self esteem.

How are congenital cataracts treated?

The density and location of the cataract will determine the appropriate treatment plan. If the cataract is severe, surgery during infancy will be recommended to restore normal vision development and prevent vision problems such as amblyopia.

Other treatments, with or without surgery, include eyeglasses, contact lenses, bifocals, and eye-patching.

Congenital and pediatric glaucoma is a rare condition that presents in 2.3 in 100,000 newborns and children, and is caused by high pressure within the eye.  The high pressure is caused by a defect in the drainage angle in the eye— which inhibits the aqueous fluid from efficiently draining out of the eye. High ocular pressure can cause damage to the optic nerve, which can lead to permanent vision loss.

In many cases, the first sign of the cancer is a cross-eyed appearance or one or both pupils appear white instead of red in pictures. While there are many reasons for pupils to appear white in flash photographs, this cancer should be ruled out through a thorough eye exam. If a tumor is discovered, the eye is generally removed.

It is important to note that this form of cancer is highly inheritable— if retinoblastoma runs in the family, it is crucial to bring your child for regular eye exams to ensure monitoring of healthy ocular development.

A coloboma is a genetic condition that forms when a baby’s eyes are developing during fetal development. In this disease, the developing eye does not close around the central seam, possibly causing a gap within many structures of the eye—the iris, macula, cornea, optic nerve, lens, uvea, or eyelid.

This rare condition occurs in approximately 1 out of every 100,000 births.

A coloboma can cause other health issues such as glaucoma and retinal detachment due to the eye’s increased vulnerability to high intraocular pressure or weak attachments to the retina, depending on the location of the coloboma.

There is currently no treatment to seal the gap, but with regular eye exams and proper management, vision loss can be prevented.

Retinopathy of prematurity, also called retrolental fibroplasia (RLF) and Terry syndrome, is a disease that affects babies that are born prematurely, before 32 gestational weeks, and have been given oxygen therapy for premature lung development.

Retinopathy of prematurity is a progessive eye disease, caused by abnormal development of retinal blood vessels that can cause vision threatening complications such as:

Schedule an eye exam with an eye doctor near you who can diagnose and manage any eye problems your child may have.

Retinitis Pigmentosa (RP) is a rare, genetic, ocular disease that causes vision loss. It affects approximately 1 in 4,000 children worldwide, and is one of the most frequently occurring forms of inherited retinal degeneration.

Retinitis Pigmentosa causes retinal damage, as a result of retinal cells breaking down and degenerating.

In its initial stage, the degeneration of cells begins in the part of the retina responsible for mid-peripheral vision— causing decreased night vision (nyctalopia), mid-peripheral visual field loss and difficulty seeing in low light. The rapid progression of the disease continues to destroy cells in the central visual field— resulting in tunnel vision, reduced visual acuity, and color vision loss.

If you have experienced any of these symptoms, contact an eye doctor near you.

There is currently no cure for RP. When children are first diagnosed with RP, they are typically referred to a low vision specialist for further evaluation. Many children benefit from low vision aids that aim to magnify existing central vision to widen the field of view and eliminate glare.

A number of low vision devices have been designed to support children and adults with RP:

Many parents of children with RP become concerned as to when their child might require the support of a cane or guide dog. Regular eye examinations will enable proper assessments of the progression of RP, and will facilitate informed decisions about low vision services.

Diabetic retinopathy can affect children with diabetes. This disease causes retinal damage that can lead to blurred or distorted vision, and even permanent vision loss if not treated effectively.

In a research study of more than 4,000 children the following percentage of children developed diabetic retinopathy within six years of being diagnosed with diabetes:

The disease is closely related to blood glucose levels and appears to progress more rapidly in children with T1D than with T2D.

While there are typically no symptoms until the disease is advanced, early detection is possible through regular diabetic retinopathy screenings, and will prevent or reduce vision loss.

Diabetic Retinopathy is usually treated with surgery and laser treatments.

Optic nerve hypoplasia (ONH) is a congenital disorder that occurs with incomplete development (hypoplasia) of the optic nerves— the nerves that carry visual information from the retina of the eye to the brain.

The cause of ONH is still not understood. Most people with ONH present with abnormal eye movements (nystagmus). This disorder can range in its degree of severity— from an inability to perceive light to unaffected functional vision, and sometimes full vision in one eye.

In addition, children with ONH are affected in different ways —some perform well in school, while others have learning disabilities or developmental delays.

Cortical visual impairment (CVI) can result from brain damage, brain malformation, infection, seizure, or any other neurological problem that affects the visual part of the brain.

A child with CVI generally contains a normal eye structure. The main problem caused by CVI is that the visual information that is sent from the eye to the brain, is not processed accurately because of abnormal brain function.

Many children with CVI successfully regain vision as new neural connections develop to recover from the initial injury or deficiency.

If you think your child may be showing symptoms of an eye health or vision problem, schedule an eye exam as soon as possible for a comprehensive evaluation. Be prepared to inform your eye doctor of any signs that you have noticed, as well any family history of eye disease, and relevant pregnancy and birth details— and any other important information.

If your child has not been reaching important developmental milestones, or does not seem to see as would be expected for their age, it is important to schedule an eye exam to rule out any eye health conditions.

With a comprehensive eye exam, your doctor will be able to identify any signs of disease or vision problem. Your eye doctor will also advise the best possible treatment for any condition that is detected.

Our Most Viewed Guide to Pediatric Eye Conditions Articles