How Does a Traumatic Brain Injury Cause Vision Problems?

Brain injuries can lead to vision problems, especially in children.

We often think of a Traumatic Brain Injury (TBI) affecting adults, however consider these facts:

A study examining causes and trends of TBI-related hospitalizations in American adolescents revealed:

As up to 80 percent of the brain is involved in vision, TBIs often impact the eyes in some way, resulting in a range of vision problems.

Symptoms indicating a vision problem from a TBI:

If your child has had a head injury, contact an eye doctor near you, who can diagnose and treat any visual problems.

SEE RELATED: What Is Accommodative Esotropia?

Which visual skills are affected by a TBI?

When processing visual information is difficult, one may strain their eyes without even knowing it, because the effort is subconscious. If the visual system is inefficient, every task can seem difficult— expending more energy than required.

The following visual skills can be affected by a TBI:

The ability of the eye to move smoothly across a printed page or while following a moving object.

The ability to quickly and accurately locate and inspect a series of stationary objects, such as words while reading.

The ability to quickly change focus from distant to near images, continually.

The ability to accurately judge relative distances of objects —how far or near they are.

The ability to monitor and interpret what is happening in the surrounding field of vision.

The ability to use both eyes together as a team – smoothly, equally and accurately.

The ability to maintain focus on a particular activity while interference, such as noise or motion, is present.

The ability to accurately picture an image in the “mind’s eye,” eye retaining and storing them for future recall.

The ability to clearly see, inspect, identify, and understand objects viewed at a distance.

The ability to understand and quickly process what is seen.

An optometrist’s role in the rehabilitation of a brain injury

A behavioral or developmental optometrist, specifically trained to work with TBI patients, will play an important role in the traumatic brain injury rehabilitation effort.

Unfortunately, many people that work in the health care professions, including head trauma rehabilitation centers, are inadequately aware of the visual problems and visual-perception consequences that can result from a TBI.

This lack of awareness creates a gap in rehabilitative services— resulting in incomplete treatment and frustration for the patient, family and treatment team.

What is traumatic brain injury rehabilitation?

Traumatic brain injury rehabilitation, commonly called neuro-optometric rehabilitation, involves the use of specialized eye exercises, lenses, prisms and other techniques to strengthen the neural connections between the eyes and the brain.

Strengthening of the visual system is crucial for TBI patients, as it helps to improve visual processing of information.

This in turn can help support many other activities of daily living— increasing independence and improving quality of life.

What is behavioral or developmental optometry?

Behavioral or developmental optometry is based upon the core principle that vision is a learned process and can be developed or enhanced at any age.

Optometrists practicing this method have continued their education beyond the basic Doctor of Optometry (O.D.) degree. This continuing education emphasizes the use of lenses, prisms, and vision therapy to enhance a patient’s visual capabilities, reduce visual stress, and prevent and rehabilitate vision problems.

As a member of the rehabilitative team, behavioral optometrists have extensive experience treating the vision problems stemming from TBI.

If your child has experienced a TBI and is suffering from visual problems, contact a developmental optometrist for a complete functional vision examination.

Treatment of visual problems will not only alleviate visual difficulties, but will also facilitate improved daily functioning.

Schedule an appointment with an eye doctor for a comprehensive eye exam, and to discuss any questions you may have about treating your child’s eye condition.

We often think of a Traumatic Brain Injury (TBI) affecting adults, however children also suffer from head injuries – resulting in a range of vision problems. 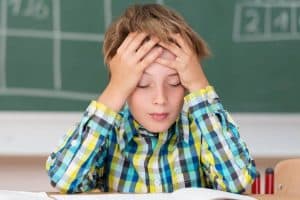 Back to:
How Does a Traumatic Brain Injury Cause Vision Problems? »