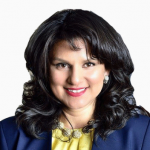 Dr. Ingryd Lorenzana is an international award-winning optometrist and vision specialist, the innovator of the groundbreaking CogniViision™ “TRAIN the BRAIN not JUST the EYES” protocol. Dr Lorenzana a true believer in Brain Training through vision as an effective method to succeed in school, excel in sports and increase productivity in the work place ultimately transforming a patient’s quality of life.

Born in Colombia, she came to the US at 10 years of age and was led to believe that her struggles with reading and attention were due to English being her second language.  It wasn’t until attending Optometry school where she was diagnosed with “convergence insufficiency” (CI) that she discovered the cause of her life long struggles and completed a course of vision therapy.

The treatment of CI was pivotal to obtaining her degree and inspired her to choose vision learning disabilities as the focus of her life’s work.  She went on to complete a Residency in Pediatrics – Binocular Vision and Perception at the Illinois Eye Institute – Illinois College of Optometry, where she also earned her doctorate degree.

After teaching in both the Illinois College of optometry and Southern College of Optometry in her earlier years, she established Advanced Vision Center in 2003, where she serves as Director for Pediatric and Adult Specialty Optometric Services.

She continuously stays at the forefront of the latest neuroscientific research as seen through the expansion of her work to include management of visual processing deficits in patients with concussion and traumatic brain injury as a certified IMPACT Pediatric and Adult Concussion Provider as well as a Certified Brain Health Provider for the Amen Clinic Method.

Dr. Lorenzana is a Fellow of both the College of Optometrist for Visual Development and The American Academy of Optometry in additional to serving as Adjunct faculty to both the Chicago College of Optometry and Western University College of Optometry.  She has made significant contributions to the arena of children’s vision research specifically in the area of amblyopia as a collaborative and active principal investigator for the Pediatric Eye Disease Investigative Group since 2004.

As a highly sought after, international speaker, Dr. Lorenzana has  garnered many industry awards for her research and contributions to optometry. She was featured on the “Donny Loves Jenny” TV series for her work with Jenny McCarthy’s Son, Evan. Recently she was named “3D Eye Doctor of the Year” from Hollywood’s 3D International and Advanced Media Society and won the 2014 Influential Women in Business Award from the Daily Herald.

In 2013, she was selected America’s Top Optometrist. However, she considers her greatest achievement to be her opportunity to make a difference in every one of her patient’s lives.